Por Cascadiasolidaria, Estados Unidos
18.10.2010
“Protesting through art is different. It’s visual, and aural. It’s much more complete.  In art, you can’t walk around with a combat-hardened face saying, ‘I am strong!  We must do this!’  No.  One must have even deeper feelings about the injustice to protest through art” Lisandro Guarcax 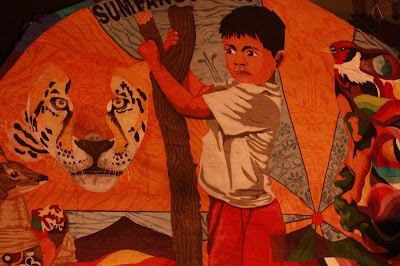 Yesterday, hundreds of people gathered in Guatemala City’s Central Park to celebrate the festival Tu Corazón Florece, dedicated to the life of Lisandro Guarcax, Maya Kaqchikel spiritual guide, artist, scholar, and activist; and to demand justice for the cruel kidnapping, torture, and murder which took him from this world on August 25 of this year.  The pluricultral artistic expressions delivered from the stage–including traditional and original music played on pre-Hispanic instruments, rock music in the Kiche’ and Spanish languages, poetry and more–and the diversity of the crowd that gathered yesterday in Lisandro’s name are a living antidote to Mario Vargas Llosa’s poisonous racist rhetoric, as dissected in the below post.
Although I did not personally know Lisandro, many people in my extended community in Guatemala and in the United States were affected deeply by his loss, and their grief and anger attests to his status as a great leader and a profound artist.  Lisandro was director and founder of Sotz’il Jay, an arts collective dedicated to researching and revitalizing pre-Hispanic Maya music, dance, and theater.  The work to which he dedicated his life is the perfect example of a synthesis of collective and individual rights: the collective rights to historical memory and to culture, and the individual rights to free expression, to artistic creation, to free association and organization.  It is almost beyond doubt that Lisandro was targeted and killed for his expression of these rights–he was both the third member of his extended family murdered in recent years, and the torture evident on his body makes clear that his death was intended as a message to others, to instill terror and silence in the broader community.  The deep political significance of Lisandro’s work is evident in the above quote, and is analyzed more deeply in a moving piece by his close friend Czarina Aggabao Thelen: The significance and brilliance of Sotz’il: Embodying Maya Liberation.
The work created by Lisandro and the other artists of Sotz’il Jay is profoundly alive, full of dignity and even humor, as seen in the following video, one of several videos of the group’s work available online:
This was the second event held to recognize Lisandro and call for justice for his assassination, following a celebration in his home department of Sololá, which was documented by a friend of mine who is a both an activist and photographer.  My friend’s blog, La Madriguera, is also a great source of photographic documentation of Guatemala’s student struggle and urban youth resistance movements.